If you’ve ever wondered how the trails in our parks measure up to a famous nature trail in a place like Dublin, Ireland, here’s your chance to get the scoop.  The renowned Cliff Path Loop attracts people from all over the world to walk along the edge of Howth Peninsula, a seaside town made famous in James Joyce’s ‘Ulysses.’  The views are breath-taking as you look across the Irish Sea, surrounded by magnificent cliff sides, as seagulls soar around the crashing water below.  Most visitors arrive in the town of Howth by train, and then walk about a mile through the charming streets, upward to the beginning of the trail, although you can drive, and park in a small parking lot at the entrance of the trail. 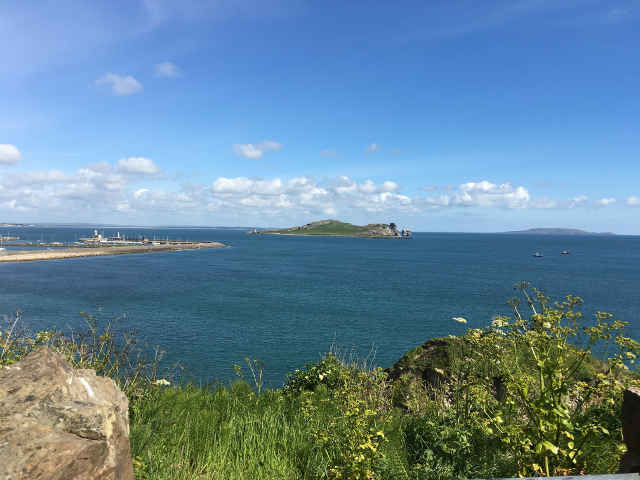 View from the cliff…

We walked on Wednesday, June 7, 2017, at 11:00 a.m., with a temperature of 55 degrees, sunny and windy.  The trail begins as a narrow gravel path meandering uphill through thick low brush.  After walking five minutes, there is a fork in the trail where one path goes inland through more brush and thorn bushes, and the other path goes toward a steep stone stairway.  We tried walking in both directions, and then stayed on the path going up the stairs.  The stairs led to a beautiful scenic spot overlooking the cliffs and sea, along with a sign warning people about falling off the side.  There were no rails of any kind anywhere along the trail. 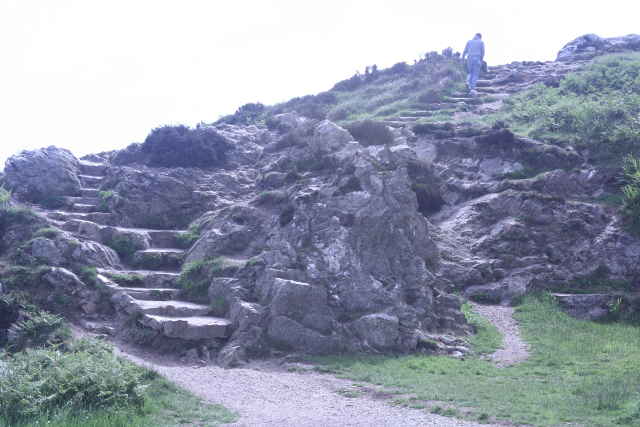 Climb to the top of the cliff…

We walked further, soaking up the beautiful sights and sounds, mesmerized by the experience, as we looked to the trail ahead, and saw it continue along the very edge of the cliff side.  The trail went around the peninsula for six miles, although we turned back after a couple of miles.

Restrooms:  There are no restrooms anywhere along the trail, but there were nice public restrooms at the Marina in Howth to be used before the walk up to the beginning of the trail.

Traffic Noise:  There was no traffic noise at all, in fact, in the only sounds were of Seagulls and wind. 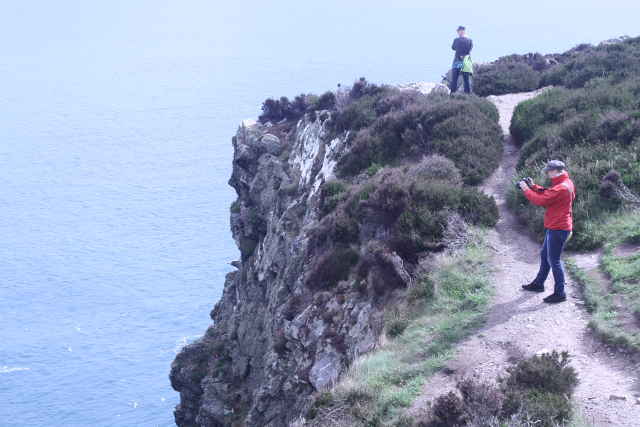 Trail on the edge of the cliff…

Historic Points of Interest:  The stone building remains of a forgotten abbey rests in Howth Marina at the start of the Cliff Path Loop trails.  The original abbey on this spot was built in 1042 by the Viking King of Dublin, King Sitric.  That was replaced in 1235, which was then replaced by the present abbey, built in the 14th century.  Then known as St. Mary’s Parish, the congregation worshipped here till around 1630, when services were moved to a nearby chapel in Howth Castle. 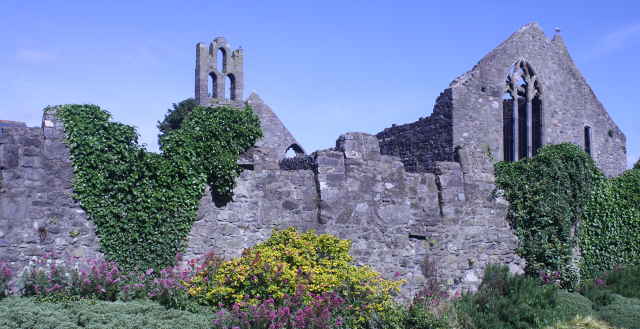 Overall Rating:  Walking this trail was an experience of a life time, of course, and you couldn’t beat the magnificent views of the Irish Sea, cliffs, quaint harbor town of Howth, or the green countryside, but there were challenges, and the trail definitely was for experienced walkers and hikers.  There were no benches or rest areas along the trail, and it turned into a narrow path running along the very edge of steep cliff side at times.  There was a tiny rustic refreshment store at the beginning of the trail, where you could sit outside and enjoy a snack and soak up the view, which was just lovely.  The owner of the store told us that we were lucky to be there on a day when it wasn’t raining.  He said the trail is slippery and unusable in rainy conditions, and it rains there often. The trail and road leading to it were also very clean, without litter of any kind, as was the rest of Ireland that we visited.  We loved this trail, and wouldn’t have missed it for the world, walking along, breathing the fresh air, basking in the views as we walked high into the sky in the magical world of nature at it’s very best. 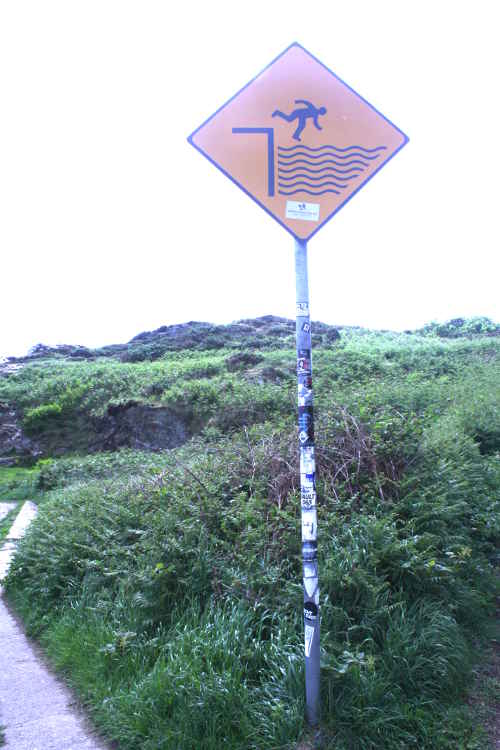 …and they’re not kidding!